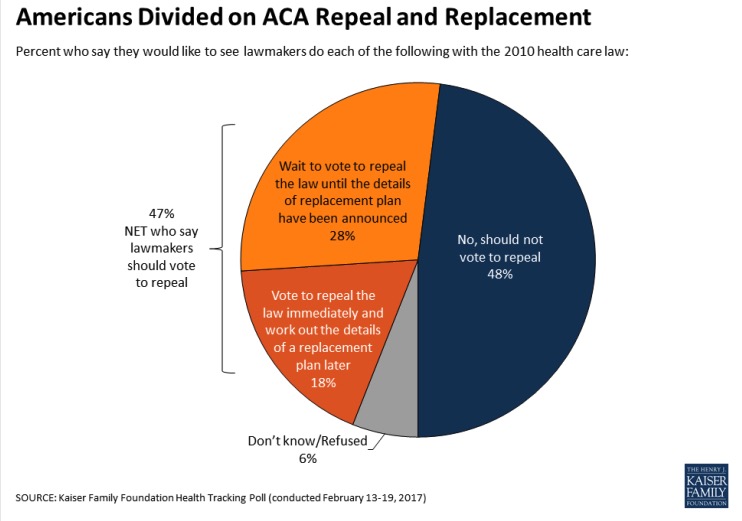 Just to troll myself. This is a mediocre post on healthcare I’ve found that interested me. So why am I posting it? Because I need to get my groove back on finding and posting value based healthcare and other noteworthy  pieces. It’s a one post at a time program.
A favorite healthcare blog Healthpopuli.com by Jane Sarasohn-Kahn had this: “Will Republican Healthcare Policy “Make America Sick Again? Two New Polls Show Growing Support for ACA”. If you are a healthcare junkie you know this. You’ve see clips from the town hall meeting were average citizens are not just protesting the repeal and replacement of the ACA but begging for help in staying healthy. Sarasohn-Kahn unwraps two recent surveys on how Americas view the ACA. They are from the Kaiser Family Foundation and Pew Research Center. The  KFF survey charts Approve/Disapprove polls for the ACA since 2010 with 48% favorable and 42% unfavorable in February 2017. Republicans as a group are against the ACA. Nothing new here. What is new are independents shifted to favorable on the ACA.
The PEW poll asked do you approve or disapprove of the healthcare law passed by Obama and Congress in 2010. The difference was greater than KFF poll with 54% approving and 43% disapproving.
The biggest difference in approval and disapproval was with younger Americans compared to older Americans. Younger adults, 65%, approve of the ACA vs. 31% who disapprove. College graduates are more likely to support the ACA than those with no college.
Sarasohn-Kahn points to a fact $1 in $5 is the healthcare economy. It is the health economy stupid.
This is just one of many many articles, posts, Tweets, and videos on the coming replacement of the ACA. In my mind I see we are moving past the yelling and lawsuits to repeal the ACA with no evidence other than a smoldering hatred for Obama. Today people are beginning to look at the evidence to think about what healthcare means personally. Of course this comes back to the reason why people learn, to solve a problem they have. The problem we are facing is if we loose the ACA and healthcare insurance we head back to being uninsured, dropped into high risk pools for pre-existing conditions, and medical bankruptcy. The good old days. It is hard to put the genie back in the bottle once we know we can receive health CARE.
FiercePharma had the following “Pharma groups to FDA: Stop that new off-label rule in its tracks” Back in August of 2015 NY State judge ruled in favor of Amarin Pharma to allow them to promote Vascepa off-label. After this ruling by the court Pharma was expecting the FDA to step back. The FDA rolled out a new rule on the subject of off label. The rule defines ‘intended use’ for drugs and devices would include ‘totality of the evidence’ standard. Pharma is worried that totality of evidence will drive more whistleblowers because they can use circumstantial evidence. Here is something I didn’t consider about free speech and sales forecasts:
“The chilling effect of such a standard is difficult to overstate,” the petition said. “For example, if a company engages in scientific exchange about off-label use, forecasts on- and off-label sales, and scales production to meet the combined demand, a prosecutor could decide that this evidence reflects an off-label intended use.”
I believe freedom of speech is important. It is also important that clear concise evidence be offered so physicians can make decisions to treat patients that will benefit the patients and not Pharma.