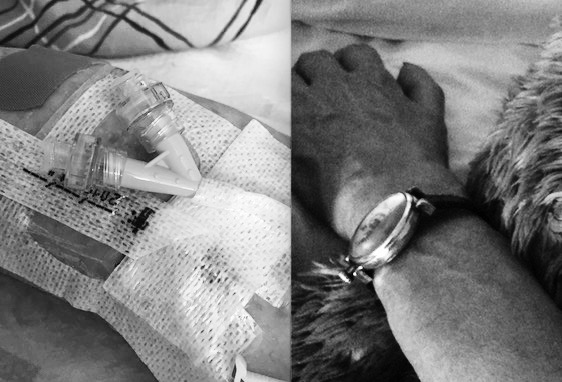 We all share the same four chemical bases in our DNA thymine, adenine, guanine, and cytosine. They are assembled differently in each of us to create a unique human. Yet as unique as our DNA makes us we overlap with one another as a Venn diagram in varying degrees. Donna my wife died August 2011. A neighbor and friend M died this week. Where Donna and M differ and where they overlap in their diagnosis’s and death is telling about death and dying in America.

Donna was diagnosed January of 2009. She had an X-Ray that showed some lesions and subsequent PET that confirmed Stage IV cancer. Donna was told she had Stage IV via voice mail at her office by her primary care physician.

In 2015 M discovered a small lump in her right breast while in England. A lumpectomy was performed and nodes were harvested. There was no distant cancers discovered in the nodes. A biopsy on the tumor show triple negative. Upon returning to the US radiation was performed and she was told she was cancer free. Four months ago M was having breathing issues with shortness of breath upon exertion. After a month of adjusting her Afib medications her cardiologist recommended she go to the emergency department of a local academic hospital. She remained in the ED for 36 hours during which she received an X-Ray of the chest determine if there was a pulmonary embolism. A PA came to her bed in the busy ED and told her you don’t have an embolism but there are lesions on your bone which is  cancer. M was discharged.

Donna was much younger that M by about 16 years. Donna had no underlying medical conditions. M had Afib.

Donna had a primary care physician (PCP) for over 20 years. Dr. S was my PCP as well for about 25 years. Even though Dr. S was a bit ham fisted with the voice mail about her cancer, he got Donna in to see the head of oncology at the academic hospital he has privileges at. The oncologist Dr. B. was simply said, amazing. He was caring, smart, focused on Donna, and became her team leader. During Donna’s first visit with Dr. B. he made it very clear to Donna. “I am your primary care physician from now on. Any physician or healthcare professional you see they check with me about any care they are giving you so I can manage it with them.’ From that point on all care and treatment up to and including hospice was lead by Dr. B.

Donna had a craniotomy for small tumor and Dr. B recommended a highly skilled neurosurgeon who we liked greatly and did an amazing job. Following the craniotomy Donna had whole brain radiation. There were issues with the radiologist. He was data driven and not entirely honest regarding hair loss. Of all the team members Donna had he was the least skilled at delivering complete care for her and communicating well. I believe this was age related since he was very young. His clinical care was excellent but there is more to radiology then math.

For the next two and a half years Donna had three rounds of chemotherapy. The first round stopped progression and shrunk two of the tumors. The chemotherapy that first round cause some nausea but not much else. Nearly 10 months later the tumors were growing and a second chemotherapy was started with less side effects. And the tumors again shrunk. In all her treatment was manageable and responsive. Dr. B gave us his cell number and we could text him any time or call. He was very responsive via email as well.

M did not have a primary care physician. She had a cardiologist for an underlying issue. The cardiologist management of M ended with the cancer diagnosis. At this point the radiologist who treated M breast cancer a year and half earlier and who M respected recommended an oncologist within the hospital system. M’s daughter and I went with M to see the oncologist on the initial visit. This oncologist was not Dr. B. she was clinically skilled but the issues with communications and listening to M and her daughter were lacking. M made it clear she did not want any chemo since this was Stage IV. The oncologist already had in mind a treatment plan and presented it without consideration for M’s clearly stated goals. This oncologist also recommended a PET to determine and extent of the disease as well as a biopsy. Again the oncologist was focused on delivering what she thought was clinically best care and not what M wanted.

M had the PET. Refused an MRI to look for lesions in the brain. M also was reluctant to have the biopsy but did.

Following these tests M, her daughter, and I went to see the oncologist for her second visit. The oncologist offered an oral chemotherapeutic agent and a bisphosphonate injection. M got the injection and filled the Rx. A major quality of life issue for both M and her daughter was the shortness of breath and how M was having great difficulty walking more than a few feet. The oncologist told M that her lungs were clear and said she thought this was an issue of the cancer in some way or perhaps part of the cardiology issue. M and the daughter could not get a clear concise answer. They were both frustrated. M asked about prognosis. That was more difficult for the oncologist as it is for any physician. M and the daughter asked about the biopsy. It took 10 minutes and a two different sites for oncologist to say I don’t have the results from a week ago. Finally she found the pathology report and said it was not complete and had to be redone but it was highly likely the lesions were from the breast cancer and were diffused.

M and her daughter left frustrated and unsure of what was going on. M went home and began the oral chemo. The shortness of breath remained the major issue that remained unaddressed. Over the course of the next two weeks M was growing more tired and the breathlessness was debilitating. The daughter called the oncologist frequently regarding the breathlessness. One rather tense call that offered no help or resolution the oncologist said that M was not her only patient. Finally M went to the ED one early morning. The ED attending sent her for an MRI. A pleural effusion was identified.

It was at this point the relationship between M, her daughter, and the oncologist broke down. The oncologist was still recommending chemotherapy. M was still saying no way. When the PA noted that on the original PET that there was some fluid in pleural cavity. M’s daughter was livid that it was not noted earlier. The oncologist was defensive saying it was very little fluid. Words were exchanged.

M was admitted for a throacentesis. On the unit M came under the care of the hospitalist.  A pulmonologist was brought in to perform the throacentesis. The oncologist remained a participating team member and was still talking chemotherapy. Following the throcentesis breathing returned to normal. M said to me, “This is amazing I am feeling so much better like life is worth living.”

M and her daughter while in the hospital met with the social worker and began the process of applying for home hospice. M was discharged and went home. A local company providing home hospice support.

Once home and the breathlessness largely resolved M rested and was doing well. Ten days to two weeks post discharge the breathlessness returned and in the middle of the night an ambulance was called to admit M to the hospital. The pleural effusion had returned. M was scheduled for a second throcentesis which would be done at an other facility. Placement of a drain was recommended in order to avoid continued pleural effusions. This time the wait for the throcentesis was ten hours.

M got back to the hospital late that evening completely exhausted. For the next week M’s daughter took on the task of finding a hospice or nursing home for M. During this period M was bedridden. She had stopped eating and was awake and talkative for short periods of time before falling asleep. I saw her each day with a kale spinach pineapple mint, and apple smoothie. She remained sharp and funny.  Her daughter was fighting to find a place for her mom and doing all the end-of-life paperwork. M was denied hospice because she was, as described by the hospitalist, “not actively dying”. M died a week after her second throcentesis in the hospital. Her daughter was with her and aggressively intervene to stop life saving measures being taken, M had in place a DNR.

Donna was in the hospital and had two throocentesis’s neither of which was successful. It was after the second on that Dr. B her oncologist called a meeting in Donna’s room to discuss palliative care and home hospice. As well as that meeting was orchestrated and run Donna shut down. I was contacted by the hospice group and set up home hospice. The effects of the whole brain radiation was beginning to present with Donna. Delirium was beginning as was Sundowning Syndrome. The palliative care team noted that her most recent MRI shown thinning for the cerebral cortex which is consistent with Alzheimer’s Disease.

By the time it came to bring Donna home, one week after her admissions for the throcentesis, Dr. S (our PCP), Dr. B., and the palliative care team recommended that Donna be admitted to the in patient hospice unit. They were not convinced that at home hospice was the best for Donna nor believe I could deliver the care she needed. On July 18, 2011 Donna entered the hospice where she remained until August 7 when she died. That is the median time for patient stays in hospice.

Donna deterioated over the weeks in hospice. First slowly and then more rapidly. Dr. S and Dr. B came to review her charts, not much to review, but mostly speak with me. There was absolutely no abandonment of Donna when she transferred to hospice from her primary care team. In addition to Dr’s. S & B there was the palliative care team, the social workers, clergy, and volunteers who were there for her and me. We were embraced at the the single more critical time in both our lives.

M and Donna both died from cancer. The diseases were different but the clinical path for both were similar though the time frame was longer with Donna. The difference that stands out for me was the clinical team.

Clinical care for M met the standards of care and was delivered skillfully. The weekly change of hospitalists was smooth because the charts were done daily. What M and her daughter did not have that Donna and I had was a team that advocated for Donna, communicated among themselves, and delivered the care that Donna wanted. There were the clinical advocates for Donna and me. M had a clinical team that advocated for standard of care. (That may be harsh and that is unintended on my part.)

The single most important thing you can do for your healthcare is to find a primary care physician and create a long term relationship. Over time the physician will understand the goals and desires you have for your healthcare. They will know your medical history as well as anyone can. They, hopefully, will become your advocate for you if you are seriously injured ill or facing difficult life decisions. The primary care physician is your single most important advocate.